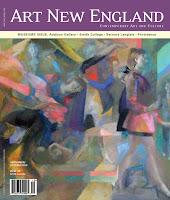 There’s a really interesting article in this issue of Art New England about the Providence art scene written by Doug Norris. Doug is a wonderfully observant art writer who primarily reviews for the South County Independent, and freelances for national publications as well.

In Providence: The Artists’ Nest, Doug describes the Providence art-scene as a incubator focusing on experimentation, collaboration, and community. This mentality is particularly fostered by the local artist run organizations such as AS220 and The Hive Archive. He also elaborates on Providences thriving anti-establishment art subcultures; artist developed micro-communities built around performances, parties, live music, daily creation, and shared spaces that emphasized the collective nature of making things. An example of this would be Fort Thunder. Fort Thunder refers to an illegally artist occupied warehouse which has recently been developed into gentrified condo space. With the eviction of the artists, Fort Thunder has come to describe a group of people (artists, makers, musicians) tied together by their beliefs and interests, but with out a tangible locale. Exhibitions and events are stages across the city in warehouse, peoples apartments, or unoccupied loading docks (which I’ve seen temporarily transformed into elaborate stages for plays), information about which is spread the old fashioned way by word of mouth and screen printed posters. One last local organization that the article mentioned is the Dirt Palace, a feminist collective operating out of a re-purposed Library building. The Dirt Palace is a space that promotes personal growth for individuals, and an environment conducive to challenging thoughts and radical actions.

Despite it’s gritty appearance, Providence proves to be a ripe locale for embracing and facilitating creative natures. There are so many unique facets to Providences art scene that it’s difficult to distinguish or separate these elements. It’s this influence and contamination of one genera to the next that I’ve always found so appealing about this town. Providence really does makes it easy to be a creator, people support one another and businesses actually cater to artists.

Be sure to check out the article below by clicking on the images to enlarge them to a readable size. You’ll also note that I’ve been quoted in this article a lot! I’m excited to have been able to contribute to such an honest, historical, and observant portrait of the city that I live and work in. 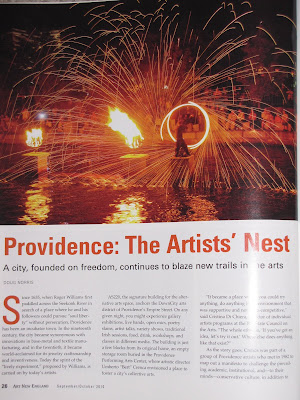 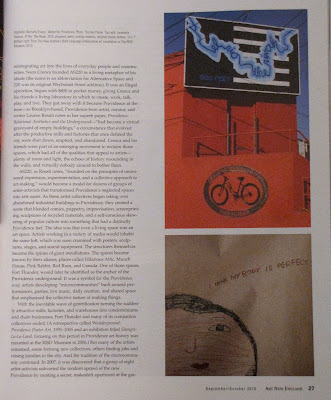 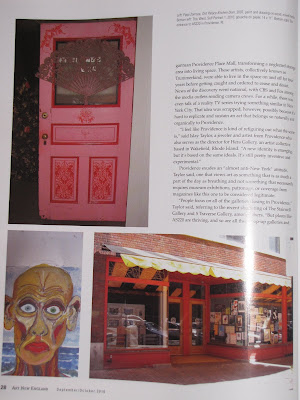 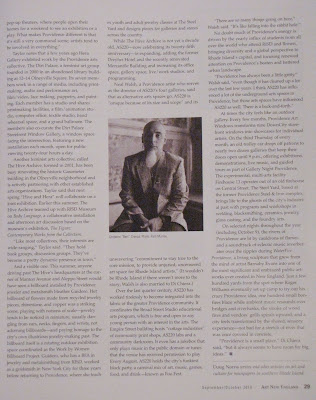