Yesterday I went to go see Kirsten Hassenfeld’s exhibit, Dans la Lune, at the David Winton Bell Gallery. If you couldn’t tell by the title of this post, it was pretty phenomenal! As it turns out, dans la lune is French for “He’s in outer space,” or “He’s on another planet;” however, it is also used as a slang term for being drugged or groggy. The title is pretty appropriate, as the ethereal quality of the installation does completely transport the viewer to a new space.

On display were six large scale hanging sculptures made entirely out of paper, velum, and foam-core. Made with the most ordinary of materials, the work is loaded with ornamental references to luxury goods, classical architecture, jewelry, and decorative arts. The resulting hybrid forms are endlessly adorned and heavy with the indulgence of ornament.

The visual stimulation from the opulent swags, chains, gems-like crystals, and honeycomb beads are made palatable by the stark white color palate. The use of the white paper neutralizes the abundant information that is a result of Hassenfeld’s thousands of hours of work cutting, gluing, folding, and painting layer upon layer of paper. Yet, there are still slight color variations within the installation. Some of the paper has a warmer tonal quality, while some components have a cooler tonal quality. As the color white shifts to blue, ecru, and ochre, the identity of the paper takes on a biological feel. It seems more alive with the loss of sterility.

The fluctuation in scale involved in this piece transcends the viewer to another world. The vibration between the artwork and the viewer is in a constant state of tension as new elements constantly reveal themselves to the viewer. Traditionally minute ornaments are enlarged to dwarf the viewer, while there are also elements that have been shrunken down exponentially.

I spent a long time in the Bell Gallery experiencing the installation. When I was still for long enough, I was able to notice that each hanging sculpture was slightly twisting and swaying. I could feel the artwork flexing in space, as the paper was quietly breathing or slowly dancing. It momentarily gave me a sense of vertigo, and it seems as though I was a little bit dans la lune. 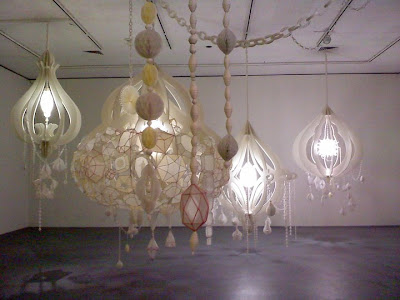 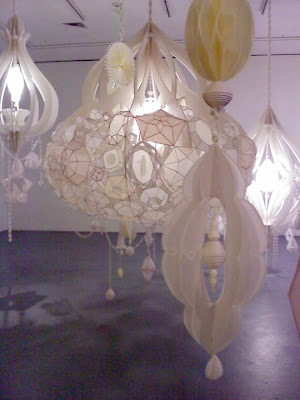 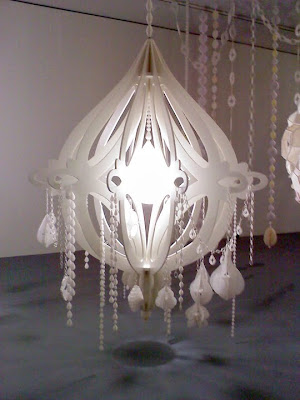 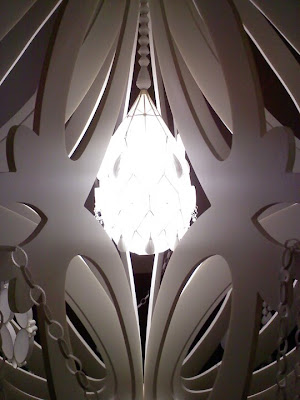 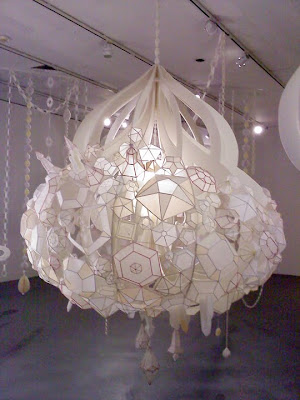 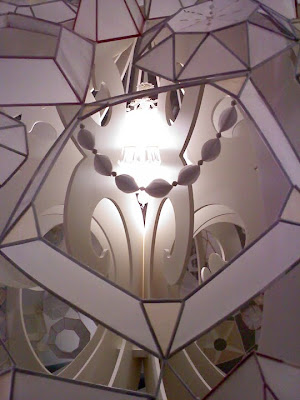 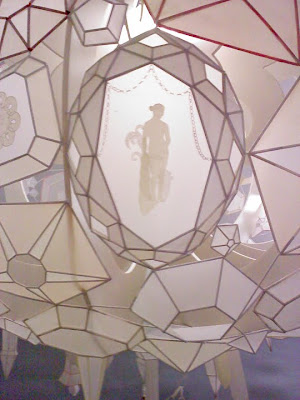