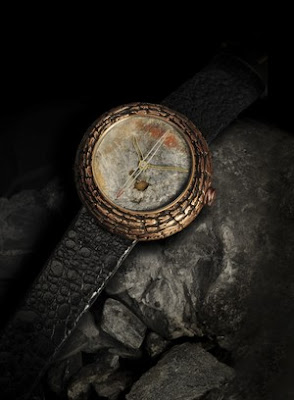 Apparently, I’m only making tacky or ironic posts these days. Supporting this revelation, I just came across an article from the Associated Press about a Swiss luxury watchmaker who just revealed a new design for a watch made of fossilized dinosaur feces, and poisonous toad skin costing $11,290. The dial is made of Coprolite, which is a fossilized animal dung.

“A relic of the Jurassic period, it has taken millions of years for this organic substance to embrace its present warm and matchless tints,” states the press release from Artya, sounding like something out of a J. Peterman catalogue parody ala Seinfeld. “In its mineral aspect, it forcefully underscores the pristine strength emanating from the very dawn of life.”

The coprolite used to make the watch dials came from a plant-eater that died about 100 million years ago in what is now the United States, designer Yvan Arpa told the Associated Press. The strap for the Coprolite watches is made with the blackened skin of American cane toads. In live cane toads, the skin is toxic and can kill if ingested.

Despite being an incredible expensive accessory, the watch looks pretty chintzy and cheap. The contrasting textures and colors compete for attention and result in a watch that definitely looks like you’re wearing crap on your wrist.