I just came across an interesting news story about the new phenomena of ‘love locks‘ in Cologne, Germany. Apparently, the officials in Cologne are baffled by the new romantic tendency to padlock ‘love locks‘ on the Hohenzollernbrücke bridge that stretches across the Rhine River. 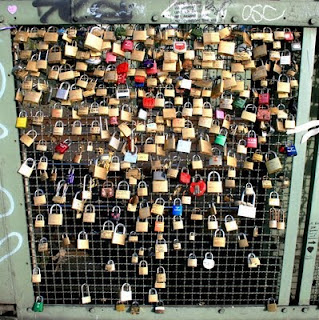 According to this new custom, couples close the padlock and then toss the key into the Rhine to signify their enduring love. Commemorating the couples’ devotion to each other, there were originally only about 10 padlocks permanently affixed to the bridge, but the number has now grown to the thousands. Some have scratched their initials in the metal locks, while others have gone as far as having them professionally engraved to honor anniversaries, weddings, or other important dates. Apparently, the tradition began in Italy, and has slowly been spreading across the world.

This commemorative act is a very Victorian sentiment, so I found it to be intriguing. I really appreciate the symbolism of jointly sealing a token and relegating the key to the Rhine. The collection has become a physical index of peoples emotions. Aside from the sentimentality of the act, the locks themselves look beautiful on the bridge. I’ve attached a photo below of a collection of heart shaped locks from The Victoria and Albert Museum, which I though were appropriate to accompany this story. If you want to learn more, I came across an interesting wikipedia page that references other communities that have adopted this symbolic gesture. 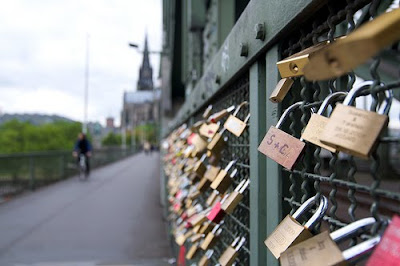