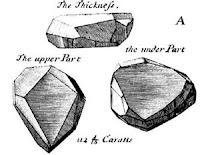 Yeah, so I totally fell prey to all the hype surrounding the Hope Diamond, and I went to go see it on my whirwind tour of D.C. The 45 carat diamond is currently on display at the National Museum of Natural History. In my defense, I went to the museum with the intention of visiting their mineral display (which is phenomenal), and didn’t even really know that the Hope Diamond was there.

There were a couple of things about the Hope Diamond that I found really interesting. First, this was the first time that it’s been displayed unset. I felt that this was an honest way to show the diamond without the added distraction of the necklace. Also, the empty necklace without the diamond set in it was stunning on its own. It looked almost lonely in it’s incompleteness, and I really liked 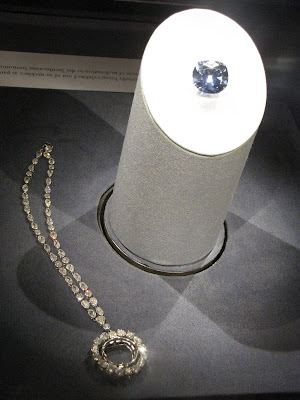 the nostalgia and vulnerability of the separation.

The other thing that really threw me about the Diamond was the fact that the exhibit actually addressed the fact that the stone is thought to be cursed. There are stories, although inaccurate, that depict the Hope Diamond originally being stolen from a Hindu Temple or being initially set in a religious sculpture; with the curse resulting from the sacrilege of the stones removal. Although a lot of the stories surrounding the stone are embellished or fabricated entirely, some of the lore is true. Many people who have encountered the diamond have died untimely deaths, from owners to stone setters, to potential thieves. It’s interesting how the history of the stone has been fabricated in such a way as to transform the diamond into an idol to be both feared and worshiped.

Images: original sketch of the Hope Diamond, uncut; Hope Diamond and empty setting at the Smithsonian.